Citilink (QG) is a low cost carrier airline flying to domestic & international routes. The cabin baggage allowance provided by this airline is 7 kg and maximum size of 56 cm x 36 cm x 23 cm (L x W x H). The international route flight ticket fare includes checked baggage allowance of 10 kg while the domestic route ticket fare also includes checked baggage allowance of 20 kg. Airport check in time at the airport starts from 180 minutes prior to the flight departure time. Check in online is allowed for flight with the airline on Citilink official website page. It can be processed 2 days prior to departure time.

1. Go to Airpaz site, or open the Airpaz application (Android/iOS) on your mobile phone. 2. Fill in the details in the flight search box. 3. Choose the best flight. 4. Fill in the passenger and contact details on the booking page. 5. Complete your payment through the selected payment method. 6. Get your Citilink flight e-ticket in the My Booking page, or in your email.

The payment for your Citilink ticket booking on Airpaz.com can be processed via bank bank transfer, credit card, PayPal, and over the counter methods. For more complete information, visit Airpaz.com Payment Guide page.

The routes served by Citilink are mostly located in Indonesia from Jakarta, Denpasar, Bandung, Malang, Medan, Padang, etc. However, there are two international destinations launched between 2017 and 2018 to Dili in East Timor and Penang in Malaysia. The Indonesian airline is supported by 50 Airbus A320 aircrafts with the capacity of 180 passengers. It also owns 5 Airbus A320NEO, which is the first to be operated in Indonesia. The airline code for Citilink Indonesia is QG, while its ICAO designation is CTV. As a proof of its service, Citilink is actually the first low cost carrier (LCC) in Asia that gets a rating of 4 stars by Skytrax. Citilink’s main airline hub is at the Juanda Airport in Surabaya, although they do have offices all over Indonesia as well. In Jakarta, its office is located in Citicon Tower Fl.14, Jl. S Parman Kav. 72 Slipi, West Jakarta. The office is open Monday to Saturday, only closing on Sundays. Citilink also has a membership arrangement, where passengers can collect Supergreen Miles according to the frequency of their flight. And being a subsidiary of Garuda Indonesia, the member’s Citilink Miles are interchangeable with Garuda Indonesia’s GarudaMiles. This allows both airlines to reward their loyal passengers by giving benefits from discount to preferred seating arrangement, to access to exclusive airport lounges.

Citilink was established in 2001 as a Strategic Business Unit of Garuda Indonesia to cater to Indonesian budget travelers. At first, it only served routes that are not served by Garuda Indonesia such as Yogyakarta, Balikpapan, and Tarakan. The destination number increased to 10 destinations in 2004. It was temporarily suspended in 2008, before being relaunched in 2009. At the time of its relaunching, Citilink’s ownership was divided between two shareholders; PT Garuda Indonesia (Persero) Tbk with 67% and PT Aerowisata with 33%. Since 2011, its flight was managed by the Garuda Indonesia Strategic Business Unit and operated under Garuda’s AOC and used their flight number. However, that changed in 2012 when PT Citilink Indonesia started operating independently with IATA flight code “QG”, ICAO Designation “CTV” and call sign “Supergreen”. Around that time, there is also a shift with the share. In 2012, Garuda Indonesia owns 94.3% of the share, while Aerowisata owns the other 5.7%.

There are two sets of uniforms for the female flight attendants, one for the attendants who wears veil and one for those who doesn’t. Both style uses green as the main color, and a signature batik pattern called Gurdo Aji. For the attendants who does not wear veil, their uniform is a set of blouse and pencil skirt, while for the ones who wears veil, their uniform is a pair of blouse and trousers instead of a skirt. The male cabin crew wears a three piece uniform with a shirt, pants, and a vest in the same color of the pants.

Citilink currently has a fleet of 50 Airbus A320 aircrafts that can accommodate up to 180 passengers in a flight.

If you have any inquiry for the airline or are facing issues on your flight such as delayed flights or lost baggage, you can directly contact the airline. To contact the airline is by sending an email to member.refund@citilink.co.id. The Citilink call center can be contacted on one of the following phone numbers

For the initial tariff paid to the airline, passengers are allowed to bring one main hand luggage and a small object that accumulates to the 7kg cabin baggage allowance. For passengers who travel with toddler, you will also be allowed to bring foods for the toddlers on board. If the toddler is also booked a chair in the airplane, you may also be allowed to bring a toddler car seat to the cabin. This, however, needs an approval from the Citilink Reservation. Large-sized object (including sports equipment) are allowed on board as long as sufficient space is available, and it will be included as part of the luggage. The maximum length of the large objects depend on the aircraft that you’re boarding; it can be a maximum of 1.58m or 2.77m. For passengers who rely on wheelchairs, the wheelchair can be taken to the aircraft baggage as registered/checked baggage free without charge. This rule also applies to parents who bring a baby stroller. The things that are prohibited on board of the Citilink are nail clippers, nail file, folding knife, scissors, knife or cutting tools, toy weapon, sprays, matches/lighters, equipment, beater, fire arms and ammunitions, electronic cigarettes. 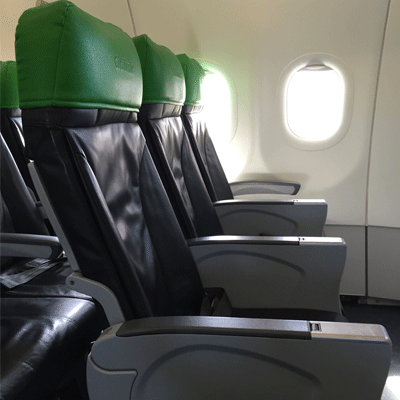 Citilink only offers the passengers with one type of class, Economy. However, the chairs offered are categorized into two: Regular Zone and Green Zone. Green zone is a more spacious seating locations for the passengers, located in row 1-5, 12 and 14. To get one of the chairs located in these rows, the passenger has to pay an additional fee of Rp 105,000 for row 2-5 and Rp 135,000 for row 1, 12 and 14. This cost includes free snack, drink, timely warranty insurance and baggage delays. The passenger who has the ticket for a seat in the Green Zone can also use the lounge facilities in the Halim Perdanakusuma International Airport.

During flights with Citilink free snack/beverage is not available. 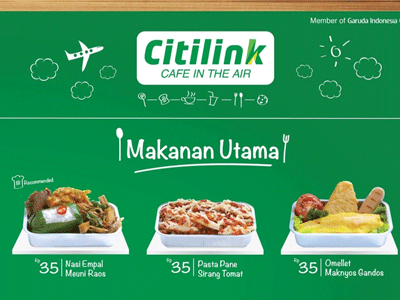 For in-flight meals, Citilink Cafe offers various foods from Nasi Kapau, Nasi Uduk, Spaghetti Bolognaise and Omelette Ratatouille among other foods. All the menu cost Rp 45,000. They can either be bought in flight, or ordered before the flight on Citilink’s website click here. 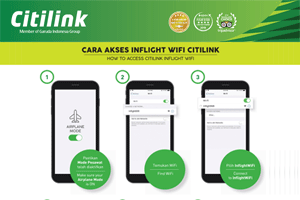 Inflight WiFi is available during flight with Citilink. 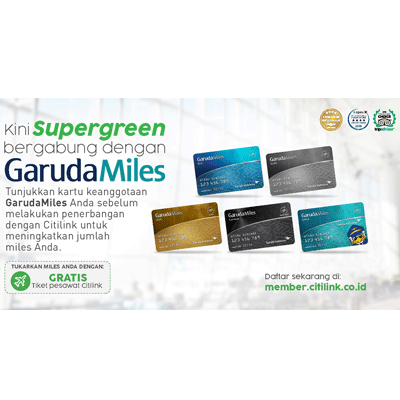 Privilege program is available for the loyal customers of Citilink, and further information on it can be read here.

For this option, you can check-in online through the Citilink’s website here. However, this option is only available 48 hours to 2.5 hours before the scheduled departure time of your flight.

Also located in the airport, the only difference of the counter and self check-in is the lack of human interaction (and less time spent) to check-in. To print your boarding pass using one of these machines, you only have to type in your booking code and last name.

For mobile app check-in, the passengers only need to download the Citilink application on their mobile phones. For Android phone owners, you can check the Play Store, while iOS owners can check the App Store for the application. The option to check-in is available in the main menu.

General Condition of Carriage for Passengers and Baggage of Citilink can be read here.

There are some fare rules that Citilink applies for passengers, for example in seat booking. Depending on which zone you choose to sit on, which ranges from Rp 105,000 to Rp 135,000 per seat. This extra fee also includes snacks, insurance and lounge facilities in the Halim Perdana Kusuma International Airport. If you are thinking of reschedule, you can do it by calling the Citilink Call Center at least 4 hours before the scheduled departure time. The fee for this service is Rp 50,000 plus the price difference of the previous ticket and the new one (if any). However, if you reschedule the ticket by using Citilink’s website, you should do it at least 24 hours before the flight. You will still have to call the call center to finalize the reschedule anyway. You can also change the name of the passenger after paying for the ticket directly at the departure airport, 24 hours before the flight is scheduled. You just have to bring the IDs of the initial passenger and the one who replace them. The administration fee for this service is Rp 300,000 to 500,000. As for refunds, there are various condition where refund can be made. Some of the reasons are if there is problem with the weather, security, technical issues, or natural disaster. Citilink will also only consider refunding if the passenger is sick and can provide documents to prove it, or a close family passed away – also needs to be proven by showing death certificate. For passengers who want to travel with friends and or families, Citilink also provides group booking for a minimum of 10 people for the same flight. To do this, you have to call their contact center. For more information about Fares, Fees, Delay Compensation and Cancellation Compensation for Citilink, please click here. Disclaimer: The airline may change its policy without any prior notification. To get an update when it happens and for their policy on insurance, flight delay, etc. check the airline’s fare rules page or directly contact the airline.