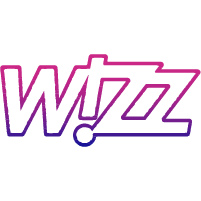 Wizz Air UK (W9) is a low cost carrier airline flying to domestic & international routes. The cabin baggage allowance provided by this airline is 10 kg and maximum size of 40 cm x 30 cm x 20 cm (L x W x H). Free checked baggage allowance is not included in the flight Check in time at the airport starts from 120 minutes before the scheduled flight departure time. Check in online is possible for flights on Wizz Air UK official website. It can be processed 1 days prior to scheduled flight departure time.

1. Go to Airpaz.com, or open the Airpaz application (Android/iOS) on your mobile phone. 2. Fill in the flight details in the flight search box. 3. Choose the best flight. 4. Fill in the passenger detail and contact information on the booking page. 5. Process your payment through the selected payment method. 6. Find your Wizz Air UK flight e-ticket in the My Booking page, or in your email.

Payment for your Wizz Air UK ticket on Airpaz.com can be processed via bank credit card, PayPal, bank transfer, and over the counter methods. For the complete information, visit Airpaz Payment Guide page.

Wizz Air UK, under the IATA code of W9 is a subsidiary of Wizz Air. It is led by József Váradi, the Company’s Chief Executive Officer, who is also the person who started the company. Its aim is to bring affordable flying experience for the citizens of Central and Eastern Europe, and to provide a new travelling experience to travelers in the EU. While it is a pretty new airline carrier, Wizz Air UK is a part of an airline company that already has a name. Having existed for 15 years, Wizz Air is currently one of the biggest low cost air carrier in Europe. It now offers more than 600 routes from 25 bases in Europe: London Luton in United Kingdom;Vienna in Austria; Tuzla in Bosnia and Herzegovina; Poznan and Wroclaw in Poland; Belgrade in Serbia; Kyiv in Ukraine; Sofia and Varna in Bulgaria; Kutaisi in Georgia; Budapest and Debrecen in Hungary; Skopje in Macedonia; Chisinau in Moldova; Riga in Latvia; Vilnius in Lithuania; Katowice, Warsaw, Gdansk, Bucharest, Cluj-Napoca, Craiova, Iasi, Sibiu and Timisoara in Romania. Its fleet is composed of 107 single type Airbus fleet from the A320 family including A320s and an A321ceo. The company also stated that they have ordered for 110 A321 neo aircraft, some of which were delivered in 2015, 20 more throughout 2018, and the rest in the future. To provide better but cheaper services to the passengers, the company offers ticketless travel, cost and time efficient secondary airports, single class all-leather seat configuration and catering on demand for an additional cost.

Wizz Air UK is a subsidiary company of Wizz Air, the low-cost airline company based in Ukraine. It was registered 13 years after its parent company, on the 26th of September 2017. Its first aircraft was ready in May, and was launched soon after. However, it will only start taking over the W6 (Wizz Air Hungary) flights from the Luton London airport at the end of October 2018.

If you have inquiries for the airline or are facing any issue during your travel such as lost baggage or cancelled flights, you can directly contact the airline. One of the ways to contact the airline is by sending an email to info@wizzair.com. The Wizz Air UK customer service call center can be contacted on one of the following numbers :

Free checked baggage allowance is not provided for the passengers flying on Wizz Air UK.

Passengers are allowed to add 6 (six) more baggages as checked-in luggage. However, they cannot be all checked-in at the airport. To use this service to its maximum capability, passengers should check 3 (three) of their suitcases online through the website and the other 3 (three) at the check-in counter at the airport. Checked-in Extra Baggage Size and Weight: - Width: 149 cm - Height: 119 cm - Length: 171 cm - Weight: 20kg (Light checked-in bag) and 32kg (Heavy checked-in bag) The cost of extra baggage for the Light Checked-In bag (max 20kg) ranges from €​14.00 – ‎​€​60.00 on low seasons, and €​19.00 – ‎​€​70.00 on high seasons depending on the range of the flight. While the cost of extra luggage for Heavy Checked-In bag (max 32kg) ranges from €​19.00 – ‎​€​74.00 to €​25.00 – ‎​€​86.00 during high seasons. Using this service, passenger will be charged of ​€​10.00/kg surcharge for bags that weigh between 20kg and 32kg. Starting on the 1st of November 2018, there will be another class of paid extra luggage with the weight of 10kg. At certain airports, the relevant baggage fee may only be paid using a credit or debitcard, such as at the Haugesund (HAU), Paris Beauvais (BVA), Cologne (CGN), Donetsk (DOK), Kyiv Zhulyany (IEV), Brno (BRQ), Oslo Sandefjord Torp (TRF), Stavanger (SVG), Dortmund (DTM), Grenoble (GNB), Kharkiv (HRK), Kristiansand (KRS), Malmo (MMX), Milan Malpensa (MXP), Pisa (PSA), Trondheim (TRD), Moscow (VKO). Baggage drop off in the airports usually closes 40 minutes before scheduled departure time. However, there are check-in desk that closes earlier. The list below contains airport with earlier closing time. Disclaimer: Information stated above is intended for general guidance only, and may be changed by the airline with no prior notification. Contact the airline for further information. 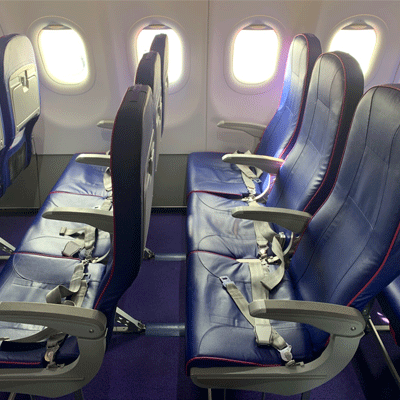 When flying with this airline, all passengers are automatically assigned a seat on the plane. However, if you decide to do so, you can have a different seat from the one assigned to you for a fee depending on its availability and position in the aircraft.

Free snack/beverage is not provided during flights with Wizz Air UK. 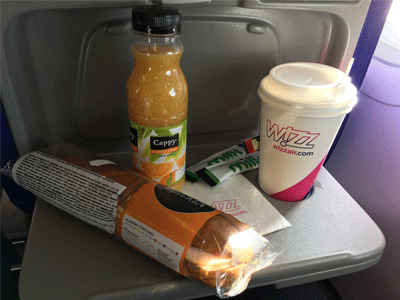 Onboard services include Wizz Cafe and Wizz Boutique. Wizz Cafe offers a selection of soups, sandwiches, snacks and drinks (coffee, tea, soda, juice, and alcoholic drink). Wizz Boutique offers various Wizz merchandise, branded watches and perfume, selections of gifts and travel accessories. All of it can be paid in cash using Euro, British Pounds, Hungarian Forint and Zlotys. Passengers can also make inflight payments using their Visa or MasterCard. The price in Pounds, Forint and Zloty are indicative prices subject to exchange rate. Return change will be given in Euros unless the local currency is available. 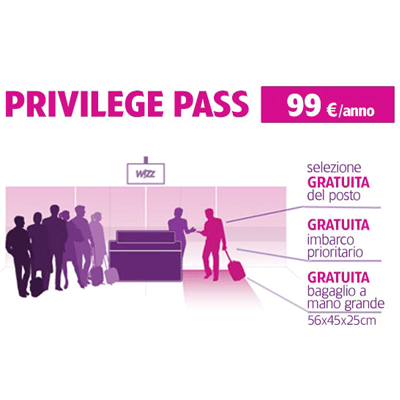 Privilege program is available for the loyal customers of Wizz Air UK, and further detail on it can be accessed here.

Web check-in is free with Wizz air, and it is available from 30 days to 3 hours before the scheduled departure time if the passenger has purchased a seat during booking. However, if they have not purchased the seat during booking, check-in will only be available 48 hours before the departure time. Here is how to complete the Wizz Air online check in: 1. Check in online on Wizz’s website 2. Print the boarding pass 3. present the printed boarding pass at the gate with your travel documents no later than 30 minutes before the scheduled departure time 4. if you hold non-EU travel documents, you need to present yourself at the check-in counter to have your documentation checked and your boarding pass stamped 5. if you have baggage to drop off, go to the baggage drop desk no later than 40 minutes prior to departure Unfortunately, however, they do not have online chat feature if the passenger needs help with their online check-in. But if it is still not clear, you can go to their official website and check the Frequently Asked Questions (FAQ) page. There are some documents-related steps that you need to pay attention to. For passengers travelling in the Schengen area, you can leave out the travel document details during the online check-in. For passengers who are not required to provide Visa details for the destinations, you can fill in the field with xxxxx. As for passengers who are under 14 years old, a passenger older than 16 will have to do their online check-in and accompany the younger passenger.

Airport check-in with W!zz is the least preferred one, since there will be a check-in fee that ranges from €​10.00 to €​30.00. However, you may also get to check in for free at the airport if online check-in services are not available yet at the airport. In these airports, online check-in is not available, and passengers will not be charged for airport check-in: · Dubai (to Budapest only) · Corfu · Palma de Mallorca · Tirana (to Budapest only) · Zaragoza Check-in starts 2 hours before the scheduled departure time and closes 40 minutes before departure. In some cases, the airport check-in desk closes earlier. The table below contains airports where the check-in desk closes earlier.

This service is not available for passengers flying with Wizz Air UK.

To check-in using your Apple or Android phone, you can download the application. If you are using the application to check in, there are three options to follow: Download the boarding pass via the app Visit the Wizz Air website from your phone’s browser and enter your flight confirmation code to print the boarding pass. If you are using iOS based phones, you can also save your boarding card to the iOS wallet. Some airports have not supported mobile boarding passes, so for those airports you have to retrieve your reservation and print your boarding card by going to the airline’s website.

For further information, read the General Condition of Carriage for Passengers and Baggage of Wizz Air , here

There are various rules regarding the flight’s delay and cancellation both if the cancellation comes from the passenger and Wizz Air. Starting from the 1st of November 2018, all fares, taxes and charges including tickets are not refundable.

Changes such as reschedule can be made to the flight ticket by directly contacting the airline. More information about Fares, Fees, Delay Compensation and Cancellation Compensation for Wizz Airlines, please click here. Disclaimer: The airline may change its policy without any prior notification. To get an update when it happens and for their policy on insurance, flight delay, etc. check the airline’s fare rules page or directly contact the airline.