Get tons of exclusive promo only on Airpaz App. Download Now!

Thai Airways (TG) is a full flight airline flying to domestic & international routes. The cabin baggage allowance given by this airline is 7 kg and max size of 56 cm x 45 cm x 25 cm (L x W x H). The passengers flying international route with Thai Airways will get free checked baggage allowance of 20 kg, while the domestic flight passengers is provided with 20 kg. Passenger can start checking in at the airport 240 minutes prior to the scheduled departure time. Check in online is available for flight with the airline on Thai Airways official website page. It can be done 1 days prior to scheduled flight departure time.

1. Go to Airpaz website, or access the Airpaz application (Android/iOS) on your handphone. 2. Fill in the details in the flight search box. 3. Choose the best flight. 4. Fill in the contact and passenger information on the booking page. 5. Process your payment through the selected method. 6. Receive your Thai Airways flight e-ticket in the My Booking page, or in your email.

The payment for your Thai Airways booking on Airpaz.com can be processed via bank credit card, PayPal, bank transfer, and over the counter methods. For more complete information, visit Airpaz.com Payment Guide page.

Thai Airways International, or trading as THAI, is the flag carrier of Thailand that was formed in 1960 as a joint venture between Thai Airways Company and the Scandinavian Airlines System. In 1988, the airline merged with its parent company and domestic carrier of Thailand, Thai Airways Company and becoming the domestic and international airline that we know today. The airline primarily operates from Bangkok Suvarnabhumi Airport, while its headquarter office is located in Vibhavadi Rangsit Road, Chatuchak District, Bangkok. From its hubs in Suvarnabhumi Airport and Phuket International Airport, the airline flies to up to more than 60 destinations in countries all over the world not limited to the ones located in Asia but also Europe.

In 1960, Thai Airways Company (TAC) that serves the domestic flight routes in Thailand arrived at an agreement with the Scandinavian Airlines System (SAS) to form a joint venture to create an airline that will serve the international routes. SAS used to own 30% share of capital in Thai Airways International, which gradually decreases over the years. In 1977, the Thai government bought out the remaining SAS share in the airline, making Thai Airways fully government-owned. However, in 1991 the airline was listed in the Stock Exchange of Thailand (SET) allowing the people to buy their share in the airline. As for the airline’s route history, its inaugural flight was from Bangkok to 9 overseas destinations in Asia from Bangkok in 1960, followed by the first intercontinental flight to Australia in 1971. Not long after, the airline launched its flight to Europe in 1972, and North America in 1980. However, the flights to North America have been stopped and restarted throughout the years, citing issues such as the high fuel cost as the reason. The last attempt to restart the flights to North America was in 2012 from Seoul to Los Angeles.

As a Thai airline, Thai Airways infuses as much of the Thai culture into its flight as possible including the uniforms of the cabin crew. The female flight attendants have two uniforms, the signature purple traditional Thai dress, and a set of matching purple blouse, blazer and skirt. However, the traditional Thai dress uniform is only allowed to be worn by Thai national flight attendants. Tying the uniform and the brand together is a fresh purple flower worn on their lapels. The male cabin crew’s uniform is also in a shade of purple, matching the female counterparts. Their uniform consists of a white shirt, purple blazer and a matching tie, and black trousers.

Thai Airways has a number of aircrafts, all of which can be checked below:

Live chat service is not available for passengers of Thai Airways.

For carry on luggage, passenger is allowed to bring one hand baggage on board. The maximum dimensions of the luggage including wheels, handles, and side pockets are 56 x 45 x 25cm or 22 x 28 x 10 in inches. The total weight of the baggage must not exceed 7kg (15lbs) and be put either in the overhead compartment or under the seat in front of them. Other than the hand carry luggage, passengers are also allowed to bring a handbag/wallet/purse as long as the size is not bigger than 37.5 x 25cm x 12.5 cm (15 x 10 x 5 inches) or total dimensions 75cm (30 inches) and weigh no more than 1.5kg (3.3lbs). Walking sticks/crutches are also allowed on board for passengers who need it. The restrictions on liquid, aerosol, and gas items are also applied with Thai Airways. LAG items must be in containers not more than 100ml. The containers (maximum total volume 1 litre) must be put in a transparent re-sealable plastic bag. Each passenger is only allowed one plastic bag.

Extra checked baggage allowance can be purchased on Airpaz. Disclaimer: Information stated above is intended for general guide only, and may be changed by the airline with no prior notification. Contact the airline for further information. 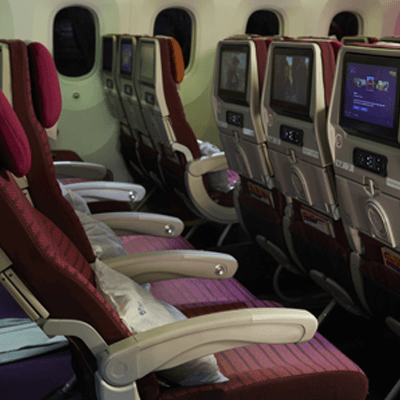 The size of the standard seat for the Economy Class fare in Thai Airways is 31"-32" seat pitch and 18" seat width. 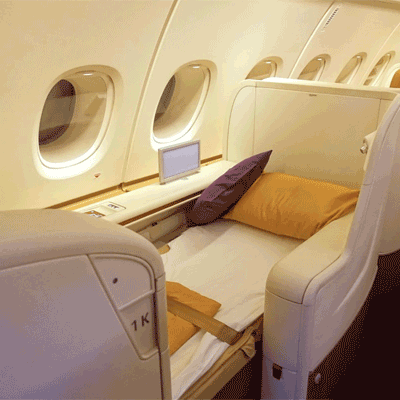 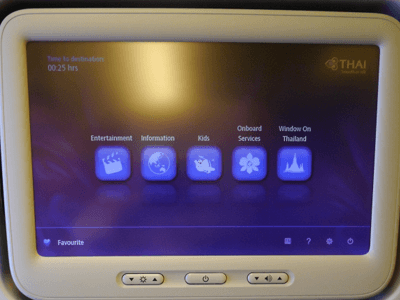 Passengers can enjoy classic in-flight entertainment such as movies, games, music, and even news on the personal screen provided in each seat. To check some of the movies that can be accessed in the aircraft, click here For passengers flying with children, the airline provides various activities to be enjoyed by the young passengers. Toys and games are provided for children in different age groups: under 3 years, 3 to 6 years, and 6 to 12 years old. Other than toys and games, there are also movies that can be chosen from the entertainment system.

The free inflight meals/snacks (depending on the route) offered by the airline are inspired by traditional Thailand cuisines and tastes with global influences, and highlighting seasonal ingredients. The airline also states that the produce used in the foods are all sustainable, and support the local farmers. Passengers who have dietary restrictions such as vegetarian can pre-order their meals by contacting the Thai Airways contact centre/local office at least 48 hours before the scheduled departure time. 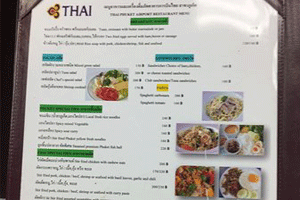 Passengers can order food to enjoy in their flight according to the availability. For the airline's meals and beverages menu, click here. 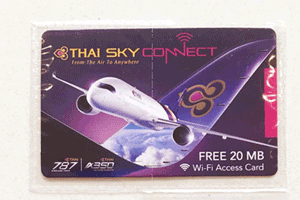 You can also enjoy connectivity during flights, as the airline provides inflight WiFi for the passengers. The inflight internet service is available on flights carried on Airbus A380-800, 350-900, and selected Airbus 330-300 and Boeing 787. The prices of the Wi-Fi packages differ according to the size: 10MB, 20MB, 30MB, 100MB, and the service provider. To read more about it, click here. 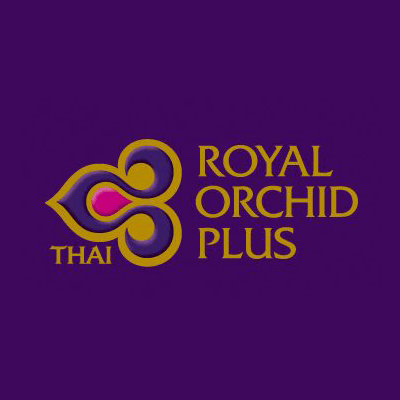 Thai Airways has a privilege program for their loyal customers, and more information on it can be accessed here.

The kiosk check in is currently only available at 7 domestic airports in Thailand, which are Bangkok (Suvarnabhumi), Chiang Mai, Chiang Rai, Phuket, KhonKaen, Hat Yai and Krabi.

For the complete Conditions of Carriage of Thai Airways, click here.

Ticket with the airline cannot be cancelled.